The super major ExxonMobil from USA and Statoil from Norway, made the final investment decision (FID) in April 2013 to start the development of the Julia oil and gas field in the US part of the Gulf of Mexico.

Drilled in 2007, 285 kilometers southwest of New Orleans, Louisiana, USA, Julia field is among the largest crude oil fields discovered in the Gulf of Mexico in the years 2000s.

To hit Julia, ExxonMobil and Statoil had to drill by 2,100 meters of water depth and 10,000 meters of total depth.

In their partnership, ExxonMobil and Statoil share the working interests such as:

– ExxonMobil 50% is the operator

According to the last estimations, Julia should hold six billion barrels reserves in-place of crude oil out of which one billion should be recoverable reserves.

Because of its size ExxonMobil and Statoil expect to produce crude oil from Julia during the next 40 years based on a full field development program planned in several phases.

In 2008, a dispute with the US Government for the extension of the 10 years lease led ExxonMobil and Statoil to nearly cancel this Julia project until a settlement could be signed on early 2012.

Since then, ExxonMobil and Statoil are gearing up to move Julia forward.

With $4 billion capital expenditure, the actual FID refers to the first phase of this Julia development program.

In order to save time ExxonMobil and Statoil designed this Julia phase-1 as simple as possible and opted for a tie-back on the existing Chevron operated Jack & St Malo offshore platform.

This Jack & St Malo platform is located only 20 kilometers away from Julia.

Operated by Chevron, this Jack & St Malo platform is also shared with Statoil where it owns 50% interest. 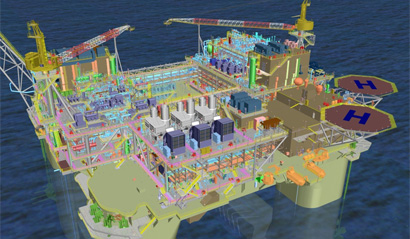 According to the terms of the contract FMC will provide:

Through these first series of six subsea trees, ExxonMobil and Statoil are planning to produce 34,000 barrels per day (b/d) of crude oil.

On its side Technip has been awarded the project management, engineering and fabrication, installation and pre-commissioning of a subsea package including:

Together with its subsidiary Genesis, Technip Houston office will provide the complete detailed design of the flowlines.

The flowlines and risers will be produced in Technip Alabama facility.

They will be installed with the Technip Deep Blue deepwater pipelay vessel.

With this Julia phase-1 project, FMC Technologies and Technip will install one of the first subsea equipment for crude oil production in the ultra deep water frontier of the Gulf of Mexico.

In awarding these subsea packages to FMC Technologies and Technip, ExxonMobil and Statoil expect to start the production of this first phase of Julia development program in 2016.