The Shah Deniz-2 partners, BP from UK, Total from France and the State Oil Company of Azerbaijan (SOCAR) have preferred the Trans-Adriatic Pipeline (TAP) project over Nabucco to export their natural gas from Azerbaijan to Europe.

At the scale of these giant projects, TAP offers the shortest and simplest route to Europe in starting from the Trans-Anatolian (TANAP) gas pipeline project in Turkey, crossing only Greece and Albania, to plug in Italy gas pipeline infrastructure.

Nabucco was more ambitious and complex, thus more costly, in crossing Bulgaria, Romania, Hungaria to end up in Austria.

The Trans-Adriatic Pipeline project was supported by Statoil from Norway, E.ON Ruhrgas (E.ON) from Germany and EGL Energy (EGL) from Switzerland.

In October 2012, EGL was wholly integrated in Axpo also from Switzerland that is now the official partner in the TAP project.

As a result, the Trans-Adriatic Pipeline joint venture is registered at Baar in Switzerland with the stakeholders sharing the working interests such as:

In addition to the actual partners, Fluxys Group from Belgium is opening negotiations with Axpo, Statoil and E.ON  to take shares in TAP and import gas up to Belgium.

Trans-Adriatic Pipeline to be developed in phases

According to the front end engineering and design (FEED) completed by ILF Consulting Engineers (ILF), the Trans-Adriatic Pipeline should be developed in phases.

The phase 1 should have a capacity of 10 billion cubic meters per year (bcm/y).

Along its 870 kilometers length, the TAP project should be composed of two main sections, 750 kilometers onshore and 110 kilometers offshore, crossing:

– Onshore Greece from Kipoi,  50 kilometers east of Komotini, at the Turkish border to Fier in the Dumre Region of Albania

– Offshore Adriatic Sea from Fier to San Foca, in the Lecce Province, at the utmost southwest of Italy.

The onshore section of the TAP pipeline project will be 48 inches large and will be supported by a gas compression station in Komotini, Greece. 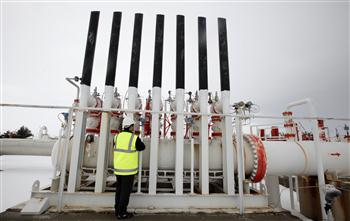 The offshore section will use a smaller size of pipeline with 36 inches compensated by a compression station in Fier, Albania.

At the reception in San Foca, Statoil and its partners are planning to build a pipeline terminal receiver (PTR) close to Melendugno.

This PTR will proceed to the decompression of the gas and the connection to the local gas grid in Italy.

The central control command of the Trans-Adriatic Pipeline will be located in the Melendugno terminal with a back up at Fier in Albania.

The Phase 2 of the TAP project should see to double the capacity of the pipeline to 20 bcm/y.

This TAP Phase 2 should include two additional compression stations.

At any time of the development of the transportation capacity of the TAP project, Axpo and its partners Statoil and E.ON, will have the opportunity to build storage capacity in underground salt formations 50 kilometers south of Tirana in the Dumre region.

With an estimated budget of $2 billion capital expenditure, the partners of the Trans-Adriatic Pipeline project, Axpo, Statoil and E.ON, had signed already in 2012 a funding agreement with the members of the Shah Deniz-2 consortium, BP, Total and SOCAR, to give them the opportunity to take up to 50% equity in the TAP project.