After the successfully appraisal of the Jangkrik natural gas discovery, ENI and GDF-Suez intend to speed up the development of the  Muara Bakau PSC, Kutei Basin, East Kalimantan, Indonesia. 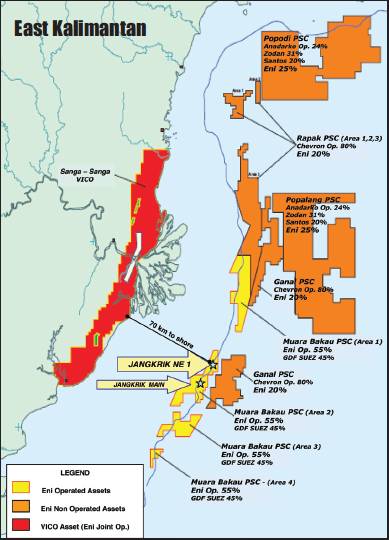 Overall, in Indonesia, ENI is very active as it holds working interests in twelve permits, and operates six of them.

ENI offshore activities are located in the Tarakan and Kutei Basins, offshore Kalimantan, north of Sumatra and West Timor.

ENI and GDF-Suez capital expenditure for the Jangkrik project is estimated to $2 billion.

In the Muara Bakau natural gas field, the working interests within the joint venture are shared between :

– Eni from Italy 55% who is the operator

Following the successful Jangkrik-2 appraisal well, ENI and GDF-Suez joint venture has decided to perform in following the assessment of the technical and commercial viability of a fast-track development of the gas.

The natural gas of the Jangkrik field should provide feedstock to the Bontang LNG plant on the East Kalimantan, Indonesia.

The Jangkrik-2 appraisal well is located in the Makassar Strait of Indonesia, approximately 70 kilometers from the East coast of Borneo, Indonesia.

The natural gas reservoir lies by 2449 m depth in 425m of water depth.

First tests show a natural gas of excellent quality with a low rate of contaminants.

The natural gas production is expected to reach 360 million cf/d. 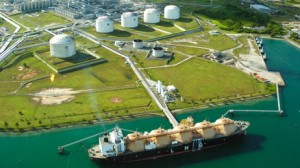 To develop the Jangkrik project on fast-track, ENI and GDF-Suez agreed on organizing the calls for tender in combining the Front end engineering and design (FEED) with the engineering procurement and construction (EPC) contracts.

From the project feasibility study the: 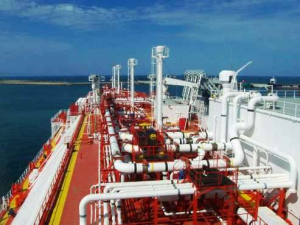 ENI and GDF-Suez have pre-qualified the following Group to bid for the joined FEED and EPC contracts:

For the SURF package (Sub-sea,Umbilical, Risers and flowlines) ENI and GDF-Suez qualified:

– Timas Suplindo and WorleyParsons and Subsea7

For this specific package , ENI and GDF-Suez could only play with the three classical bidders:

In respect with their fast-track development program of the Jangkrik natural gas, ENI and GDF-Suez are expecting to issue the calls for tender in summer in order to make the final investment decision (FID) in first quarter 2013 for a completion and start-up in 2016.