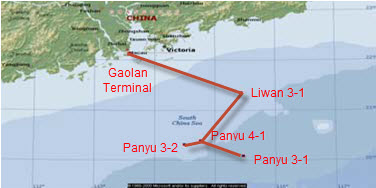 The Panyu field is made of different pockets of raw natural gas, Panyu 34-1, Panyu 35-1 and Panyu 35-2 located 150 kilometers south of Hong Kong in water depth ranging between 190 an 380 meters in the South China sea.

CNOOC is developing the Panyu offshore field through different clusters connected through pipelines to processing platforms before to be exported toward an onshore terminal. 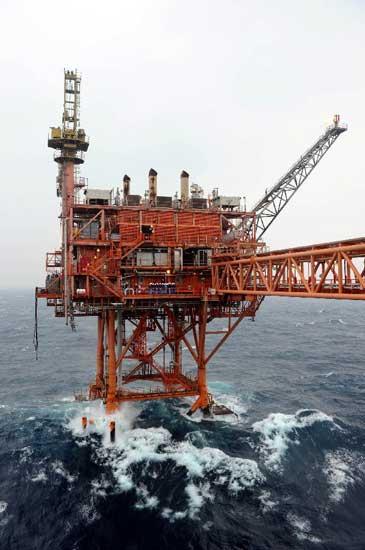 In this scheme, the subsea production facilities in Panyu 35-1 and Panyu 35-2 are tied-in through flowlines to the Panyu 34-1 central processing platform for a first treatment before being exported through 31 kilometers pipeline to the Liwan 3-1 central equipment platform.

On the Liwan 3-1 platform, the gas goes through separation and compression to be boosted to the onshore Gaolan import terminal at Zuhai in the Guandong Province, China.

CNOOEC is the engineering, procurement and construction (EPC) contractor of the Panyu 34-1 offshore platform and 31 kilometers export pipeline to the Liwan 3-1 platform already in construction.

In addition to this EPC contract, CNOOC awarded to the Technip – COOEC Consortium the subsea package for the connection of the subsea production facilities in Panyu 35-1 and Panyu 35- to the central processing platform Panyu 34-1.

In this cope of work:

– Technip will design, build and install the umbilicals, risers and subsea connectors.

– COOEC will lay down all the pipelines between the subsea production facilities and the central processing platform Panyu 34-1.

The export pipeline from Panyu 34-1 to Liwan 3-1 is part of the other package including the Panyu 34-1 platform and awarded to COOEC alone.

For this Panyu subsea package, Technip will lead the consortium and will operate from its Asia Pacific Regional Office located in Kuala lumpur, Malaysia.

Genesis engineering, acquired by Technip earlier this year, will assist the  consortium for the engineering, design and development of the subsea drilling solutions.

The Houston based-Duco Inc. in Texas will manufacture and supply the steel tube umbilicals comprising 10″ and 6″ clad-lined pipelines with associated accessories.

In June 2012, CNOOC selected Cameron for the subsea trees, manifolds and other equipment of the subsea system.

Considering that the giant CNOOC’s Liwan 3-1 platform should come on stream in 2014, the Panyu offshore complex is expected to be connected to Liwan 6 months later requiring Technip and its partner COOEC to plan the subsea installation in the Panyu project on first half 2014 in parallel of Liwan commissioning and start up.