Air Liquide is pursuing its long-term development in Russia, and starting-up a new Air Separation Unit (ASU) that will produce oxygen and nitrogen in the Special Economic Zone “Alabuga” in the Volga region, Tatarstan.

Tatarstan‘s economy is the fifth largest in Russia in terms of gross regional product. It is located in the centre of a large industrial zone, 800 km east of Moscow. 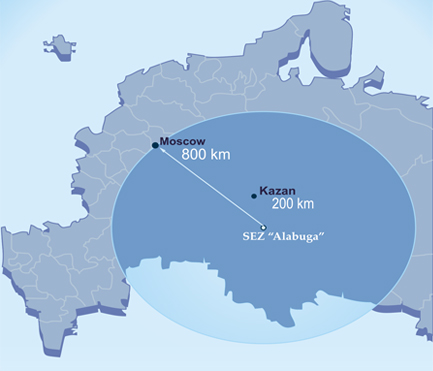 The leading agencies Forbes and Ernst&Young evaluate the Republic of Tatarstan as the best region for doing business in Russia.

One of the main drivers of this large regional economy is a significant manufacturing capacity: industrial production constitutes about 40% of Tatarstan’s gross regional product.

This new state-of-the-art Air Separation Unit will produce 200 tonnes per day of oxygen and nitrogen to supply the current and future needs of industrial customers in the region.

It is fully standardized, highly cost efficient, comes in fully packaged modules and offers many benefits, including compact design and layout and simpler operations and maintenance.

Air Liquide is planning to further develop its business in Alabuga by creating a pipeline network and developing supply chain for its customers.

Air Liquide’s overall capital expenditure in this project is around $35 million.

Air Liquide has been present in SEZ Alabuga since 2008. In the first step, which started up in 2010, a unit producing 40 tonnes per day of gaseous oxygen to supply by pipeline Preiss-Damler-Tatneft’s fiberglass production unit was commissioned.

Oxygen, nitrogen, hydrogen and rare gases have been at the core of Air Liquide’s activities

Air Liquide to spend $1.3 billion in 10 years in Russia

Air Liquide in Russia where it was established in Russia in 1989 and was primarily concerned with the sale of industrial gas production equipment.

In 2005, the Russian Air Liquide‘s subsidiary for production and sale of industrial gases was founded.

Since then, the Russian industrial gases market has been growing annually by 5% and is still in its development phase.

After taking over the local company Logika in Moscow, Air Liquide is planning to continue acquisition in Saint Petersbourg in order to benefit from the actual wave of the Russian industry to change their business model in out sourcing old and inefficient air separation activities to buy their industrial gases as feedstock.

In the period 2005 to 2015, Air Liquide keeps on track its Market Leadership enhancement program in spending $1.3 billion (€1.0 billion) capital expenditure in Russia.