Suncor Energy (Suncor) from Canada and its partners, Total from France and Teck Resources Ltd (Teck) from Canada, made the final investment decision (FID) to develop Fort Hills oil sands mine project in Athabasca at the northeast of Alberta, Canada.

This decision comes in a context where the barrels prices stand solid around $100 per barrel, well above the breakeven value of $85 per barrel to develop oil sands mines in Alberta. 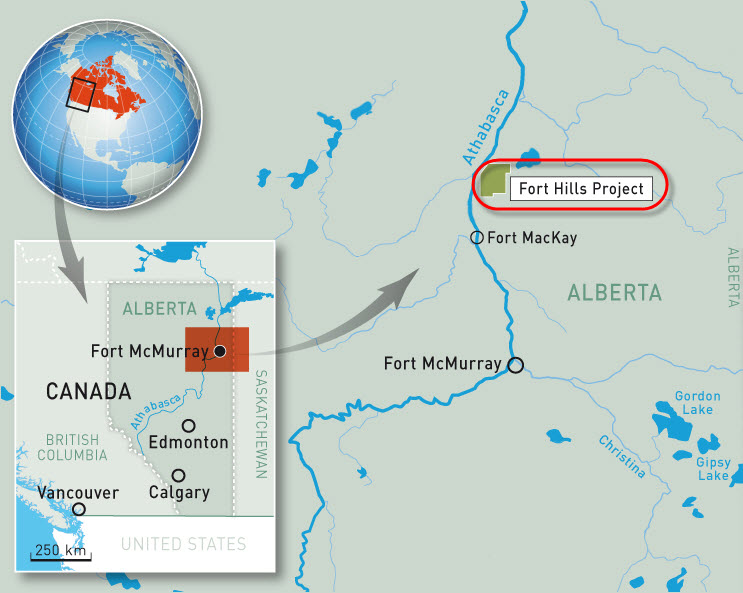 With contingent reserves estimated to 3.3 billion barrels of oil, the Forth Hills mine appears as one of the largest oil sand fields in the Athabasca region.

Located 90 kilometers north of Fort McMurray and approximately 500 kilometers northeast Edmonton, in Alberta, the Fort Hills project had been shelved in 2008 in a context of financial crisis and rising costs.

At that time Fort Hills was a joint venture between Petro-Canada, Teck and UTS Energy.

Since then Suncor merged with Petro-Canada in March 2009 and Total acquired UTS Energy in June 2010.

As a result of this reshuffle of financial interests between the new partners, the working interests in the purposely established Fort Hills Energy company ends up as:

With this consolidation of the partners around the table, Fort Hills project should have started a year ago.

Since 2012 the new partners revised their respective interests in three projects interconnected between Fort Hills, Joslyn Oil Sand mine and the Voyager upgrader.

This Voyager upgrader came into question with the development of the tight oil on the US side of the boarder.

The purpose of this upgrader is to provide a pre-treatment to the extra heavy crude oil coming from the  oil sands mines to allow its export to the existing refineries in USA.

With the development of the tight oil in USA, the justification of the Voyager upgrader came into questions for some partners.

It took about one year between the partners to clarify their respective positions and to come to the final investment decision in Fort Hills mine project.

To be developed as mining project, Suncor and its partners will spend $13.5 billion capital expenditure in Fort Hills.

The delay has also given the opportunity to Suncor to review all the costs and to upgrade all the environmental requirements of the project, especially about the water quality during the duration of the operations and to reclaim the site as close as possible to its original natural state.

The intention is to produce 180,000 barrels per day (b/d) at plateau production expected to last 50 years.

In awarding the engineering, procurement and construction (EPC) contract and in making the final investment decision on this year end 2013 for the Fort Hills oil sands mine project, Suncor and its partners Total  and Teck are targeting to start commercial operation on last quarter 2017 or early 2018.