Statoil and Husky to consider FPSO for Flemish Pass

The Norwegian national oil company (NOC) Statoil ASA (Statoil) and the Canadian company Husky Energy Inc. (Husky) are accumulating crude oil discoveries in the Flemish Pass basin that could justify a development with a floating production, storage and offloading (FPSO) vessel offshore the Newfoundland and Labrador Province in Eastern Canada.

The size of these discoveries, the first of that kind in the region, are very encouraging to motivate other companies to boost exploration in this Flemish Pass basin. 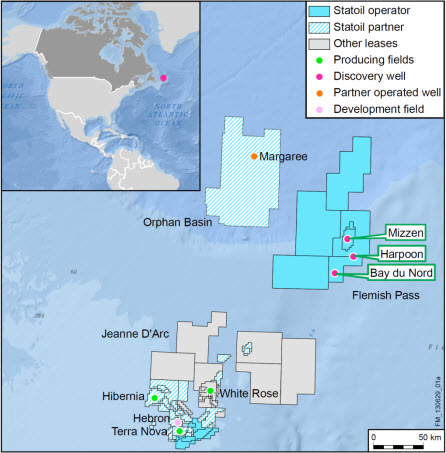 For Statoil these discoveries are also the largest ever done outside home in the Norwegian Continental Shelf (NCS).

Globally Flemish Pas crude discoveries rank in the top twelve oil finds in the world over the last four years.

In 2009, Statoil and Husky drilled a first well at the Mizzen prospect in the Block EL 1049 approximately 500 kilometers northeast of Saint John in Newfoundland.

As to test the operability of offshore facilities in the North Atlantic extreme conditions, the Mizzen well was drilled by 1,100 meters of water depth during the winter season.

After an appraisal drilling campaign, Statoil and Husky estimated in June 2012 the Mizzen discovery to hold between 100 million and 200 million barrels of recoverable reserves of crude oil.

Since then, Statoil and Husky drilled two other discovery wells, Bay du Nord and Harpoon in the Block EL1112. 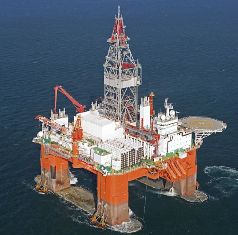 Although Harpoon recoverable reserves are still under evaluation, the locations and quantities of these discoveries within the Flemish Pass basin rise high expectations that the licensed Block EL 1049 and EL 1112 may contain much better surprises.

In the first analysis of the crude oil unveil good quality light crude in Bay du Nord and Harpoon and a bit heavier crude in Mizzen.

These recent discoveries and the more to come justify the Flemish Pass to become a core region for Statoil Exploration – Production.

In the Flemish Pass, the working interests in the Block EL 1049 and EL 11112 are shared between:

In this context, the status of core region given to the Flemish Pass indicates the intention of Statoil and its partner to concentrate exploration and production efforts in order to develop these crude oil fields on fast track.

Due to the extreme conditions of the North Atlantic Sea in this region, Statoil and Husky are already considering to design a disconnectable FPSO that could avoid iceberg collisions, such as Sevan concrete structure.

No decision is made so far, but Statoil and Husky are already setting a target to turn the Flemish Pass FPSO project into commercial operations before 2020.