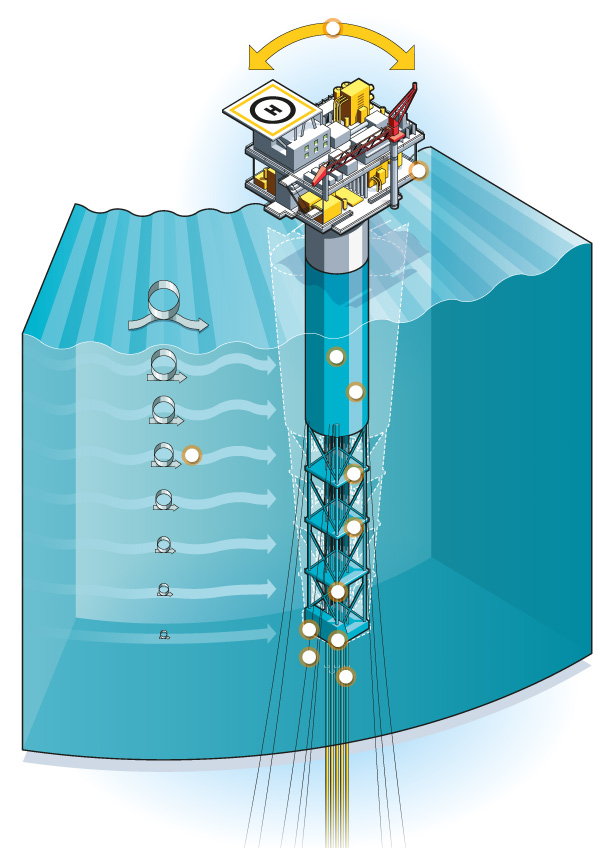 SPAR is the acronym for Single Point Anchor Reservoir (SPAR).

This descriptive definition refers to a floating system with infield flow lines and associated subsea infrastructure to connect the subsea production and injection wells. 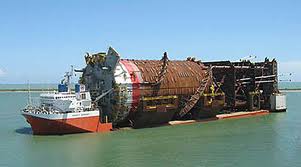 From design perspective a SPAR is a cylindrical, partially submerged offshore drilling and production platform that is particularly well-adapted to deep water.

SPAR platforms are among the largest offshore platforms in use.

The cylinder does not extend all the way to the seafloor, but instead is tethered to the bottom by a series of cables and lines.

The large cylinder serves to stabilize the platform in the water, and allows for movement to absorb the force of potential hurricanes.

The first SPAR platform in the Gulf of Mexico was installed in September of 1996.

Its cylinder measured 770 feet long and was 70 feet in diameter, and the platform operated in 1,930 feet of water.

SPAR is moored to the seabed like TLP, but whereas a TLP has vertical tension tethers, a SPAR has more conventional mooring lines.

SPAR has to date been designed in three configurations: 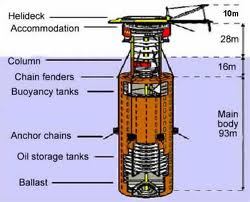 – Cell SPAR which is built from multiple vertical cylinders

The SPAR has more inherent stability than a TLP since it has a large counterweight at the bottom and does not depend on the mooring to hold it upright.

It also has the ability, by adjusting the mooring line tensions (using chain-jacks attached to the mooring lines), to move horizontally and to position itself over wells at some distance from the main platform location.

The first production SPAR was the Keer-McGee’s Neptune, anchored in 1,930 ft (590 m) in the Gulf of Mexico; however, SPAR (such as Brent SPAR) were previously used only as FSOs

The world’s deepest platform is currently the Shell’s Perdido SPAR in the Gulf of Mexico, floating in 2,438 meters of water. It was built at a capital expenditure of $3 billion

In 2012, Aker Solutions has been awarded a FEED (front-end engineering and design) contract from Statoil to design the world’s largest SPAR platform for the Aasta Hansteen field development in the Norwegian North Sea.