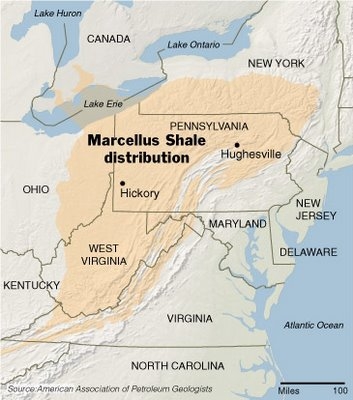 Today the Marcellus Shale gas field in USA is considered with its 500 trillion cuf gas reserves as the second biggest gas field in the World after… the North field in Offshore Qatar. Many companies are operating in this field covering  the states of New York, Pennsylvania, Ohio and West Virginia, USA.

Among the key players, the RANGE RESOURCES CORPORATION, based in Forth Worth, Texas, USA, the  announced for 2012 its capital expenditure budget set at $1.6 billion.  This budget includes $1.3 billion for drilling and re-completions out of which approximately 75% of the budget will be targeted toward liquids-rich and oil projects predominately in the Marcellus Shale and horizontal Mississippian plays.

For 2012, all-in finding and development costs are projected to average $1.00 per mcuf or less. With an average gas prices expected around $3.00 per mcuf on the same period, the development of the Marcellus Shale gas field remains very profitable.

In the Lycoming County in the northeast portion of the play, Range expects the wells with a 4,900 foot lateral length to cost $6.2 million.

As previously announced, Range has made significant progress on marketing future ethane production by signing an agreement to ship up to 20,000 barrels of ethane per day on Enterprise’s ATEX Express pipeline which is expected to commence deliveries in 2014.  This is in addition to the 15,000 barrels of ethane that will be delivered to Sarnia, Canada via the Mariner West project which is expected to commence in late 2013.  At year-end 2011, Range was capable of producing 20,000 barrels of ethane per day (17,000 net).  The Range expects to complete additional ethane sales contracts in the future to cover its growing ethane capabilities.

During the years, Range has helped to pioneer a number of best practices in the super-rich and wet gas producing areas in Appalachia working with stakeholders in the industry, academia, conservation and the regulatory community.  This includes enhanced measures to reduce and eliminate potential impacts on health and safety, including air and water resources.  Many of these efforts are aimed at reducing potential emissions and stray gas during all phases of development including drilling, completion, flow back and final production; including vapor recovery units, workplace and first responder training, increased set backs from hydrocarbons on location and enhanced equipment and facilities.   Several steps have also been taken to protect water resources including advancements in spill containment and prevention plans, equipment and training.