The IECEx, the IEC System for Certification for Standards relating to Equipment for Use in Explosive Atmospheres, and ESMA (Emirates Standardization and Metrology Authority), in conjunction with UNECE (United Nations Economic Commission for Europe), have organized the 2012 IECEx International Conference in Dubai, United Arab Emirates, on last 20-21 March 2012. 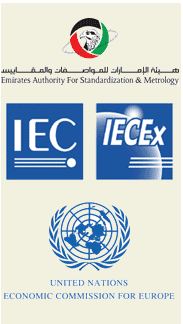 High-level experts were able to share their experience and detailed knowledge of all matters pertaining to the Ex field, such as plant design, principles and practical applications of area classification, installation and repair in compliance with IEC International Standards. They also answered questions and provided advice and valuable information to a captive and highly-motivated audience.

The initial impetus of the conference came from ESMA. UAE authorities were looking at ways of ensuring the highest levels of safety for workers, installations and equipment in the oil and gas sector. In addition, ESMA expressed its intention to begin implementation of the UNECE‘s common regulatory framework, which lays out the key features of a regulatory system, and can be put to direct use by countries that either do not have regulations in this sector or are in the process of revising existing regulations.

While standards are already being applied extensively by local industry in the United Arab Emirates, ESMA is now developing mandatory technical regulation in the explosive environments sector. Mohammed Saleh Badri, ESMA Acting Director General, said that lessons learned at the Conference will contribute to shaping the new regulatory system. For him, the next step will be to promote awareness about the role and importance of standardization and certification bodies and their activities in the oil and gas sector so as to ensure industry’s compliance with international standards, protect facilities from hazards and prevent disasters and accidents.

Badri said the conference was in line with the UAE government’s guidelines and UAE Vision 2021 for making the country one of the world’s safest by 2021. It also coincides with the UAE strategy that aims to ensure security and public safety.

In developing the regulation, ESMA will refer to international standards, most importantly those developed by IEC and used by business and regulatory authorities throughout the world. While standards are essential, they need to be properly applied. According to the Executive Secretary of IECEx, Chris Agius: “The mission of the IECEx system is to ensure that equipment conforms to the standards, that it is installed and repaired in conformity with industry best practice, and that all the personnel who work in these environments are competent.”

Organizers, speakers and participants all agreed that the conference was a great success. For many who attended, it was a real eye-opener. Building on this, both IECEx and UNECE are considering the organization of similar events in other parts of the world. In addition, the two organizations will deliver a Joint Technical Paper at the 2012 PCIC Europe Conference, to be held in Prague next June.