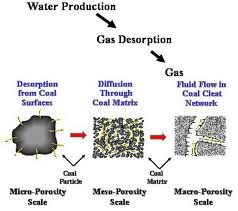 “CBM” is the acronym of CoalBed Methane. CBM is a form of natural gas found along with coal seams underground. It is also called as Sweet gas because of lack of hydrogen sulphide in it

In a natural gas reservoir, gas is compressed by the pressure in the formation.  Expansion of the gas provides the means for the gas to be produced. 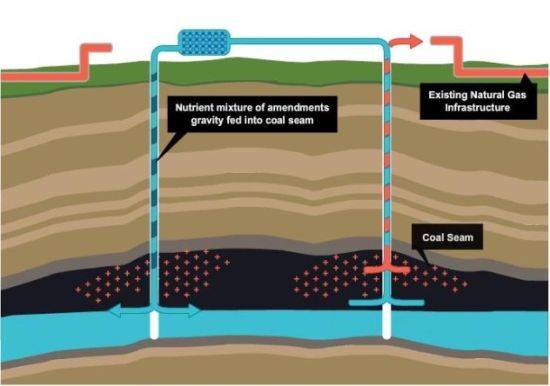 In a coal reservoir, the gas is stored within the coal matrix by a process known as adsorption.

Note that this process is adsorption, and not absorption

In adsorption, the gas molecules adhere to the surface of the coal.  Coal is naturally fractured, with closely spaced, regular, planar fractures that are collectively known as cleats.

As the reservoir pressure is reduced, gas is released from the coal surface, diffuses through the coal matrix, flows through the fracture system of the coal, and then on to be produced.

The release of gas is commonly described by a pressure relationship called the Langmuir Isotherm.

For the purposes of CBM production a coal reservoir is considered to be a system that consists of fractures and matrix.  This concept is similar to the model proposed by Warren and Root and is shown below.