The Dorra gas field is located in the so called Divided Zone between Saudi Arabia and Kuwait.

According to the agreement signed in 1965 between the two countries, this Divided Zone results from the ex Neutral Zone, 300 km Northeast Dammam in Saudi Arabia and 130 km South Kuwait city, where each country can decide for the  Oil & Gas resources development as long as they remain equally shared.

Kuwait and Saudi Arabia are moving ahead with plans to develop the offshore Dorra non-associated gas field.

Al-Khafji Joint Operations (KJO), the Saudi/Kuwaiti operator which works in the Divided Zone between the two countries, has appointed the Australian WorleyParsons engineering company to work on the Front End Engineering and Design (FEED).

WorleyParsons is actually completing the FEED and running through clarifications with the qualified contractors.

This Dorra gas field development offshore package should include: 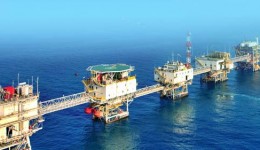 – Interconnecting flowlines between the platforms

In the Onshore package, the Dorra gas field project will cover the gas processing facility.

This onshore package is estimated to $1 billion capital expenditure.

In respect with the near completion of the FEED,  Al-Khafji Joint Operations (KJO) is set to issue the call for  tenders for the  estimated $1.5 billion engineering, procurement and construction (EPC) contract for the offshore non-associated Dorra gas field on next quarter.