Brazil has come forward with cash injections aimed at bringing the gas into the international markets and help Peru’s Petrochemical sector development. 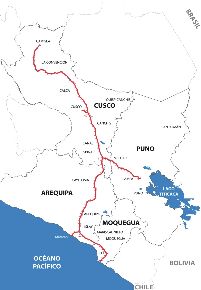 Odebrecht will lead a consortium of three Brazilian firms plans to spend up to $5 billion capital expenditure instead of the previous $3 billion  in the perspective of higher potential for Peru’s natural gas sector.

The Peru’s Southern Andean Gas Pipeline will be 1,000 km long, from the Camisea gas fields to Quillabamba, then to the region of Tacna in Southern Peru, close to the Chile boarder.

Petrobras expects to find 8 trillion-10 trillion cubic feet of natural gas in the Camisea fields currently under exploration and development.P

The pipeline will be operated by Kuntur Transportadora de Gas, owned by Odebrecht of Brazil.

Petrobras plans even to export some of the natural gas extracted from the fields as LNG to Chile.

Peru has eyes on Brazil and Chile as potential export markets, even as both pursue ambitious and controversial hydroelectric projects.

A similar plan to export Peruvian electricity to Ecuador is awaiting implementation several years after the commissioning of transmission lines connecting the countries.

The first phase of the pipeline will be extended to the mainly agricultural town of Quillabamba where the economy depends actually on coffee, cacao, tea and coca plantations

But that is likely to change when the gas pipeline becomes operational to supply:

Braskem says it aims to $3.5 billion capital expenditure to produce a range of petrochemicals, including explosives, at the plant.

The petrochemical complex is due for completion in 2016

The second phase consists of building an additional pipeline to Ilo on the Peruvian coast, then stretched to in the region of Tacna, near the Chilean border.

This second phase will supply gas to a new petrochemical complex on the Peruvian southern coast, the first to be built on the Pacific coast, where $16 billion projects capital expenditure  are planned to add at least one percent to Peru‘s gross domestic product.

The construction on the second phase would begin in 2014 for completion by mid-2016, while the pipeline to Tacna would be ready by late 2017.