Fujairah refinery, a strategic project for the UAE

International Petroleum Investment Company (IPIC) is moving ahead with the crude oil refinery project to be located at Fujairah, UAE.

The Fujairah refinery project should be developed in two phases:

– First phase: construction of the Refinery to be completed by 2017

– Second phase: development of the petrochemical complex including a 1.2 million t/y polypropylene plant.

The Fujairah Refinery project is a strategic initiative of the Government. 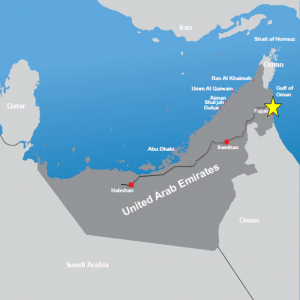 To be located near the new Abu Dhabi crude oil pipeline Main oil Terminal and the UAE deep water Export Terminals in Fujairah, the Refinery is a master piece of the Government strategy to shortcut the Strait of Hormuz.

The proposed Fujairah refinery would be near the outlet of a 1.5 million-barrel-a-day oil pipeline running to the coast and set to be completed in 2012.

The pipeline will give access for exports to the Gulf of Oman, allowing shipments to bypass the Strait of Hormuz, the transit point for tankers hauling oil from producers including Saudi Arabia, Qatar, Iraq and Kuwait.

In addition to this geographical aspects to secure the export of crude oil from the Gulf Cooperation Council (GCC) Countries, IPIC intents to give the Fujairah refinery the capability to meet its own power generation requirements.

It means that the project will include power generation facilities.

The Government wants also to take this opportunity to provide power supply to the local grid of the Northern Emirates.

Through the capital expenditure in the refinery and all the associated infrastructures needed around for about the same amount, the IPIC’s Fujairah refinery will create significant opportunities in Northern Emirates.

The refinery is expected to create more than 750 job opportunities out of which 375 to 400 wil be for UAE Nationals, once it comes into operation.

The refinery shall be designed to process UAE crude oil such as Murban, Upper Zakum and Dubai.

In April 2011, IPIC had awarded the Project Management Consultancy (PMC) contract and the pre-front end engineering and design (feasibility study) phase of the Fujairah Refinery to Shaw Stone & Webster. 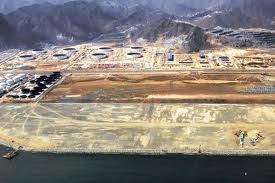 The Shaw Group completed the project feasibility study, so that IPIC could proceed with the call for tender for the front end engineering and design (FEED) contract.

At least Fluor from USA and Technip from France are going to bid.

IPIC is targeting the Fujairah refinery project completion to occur by mid 2016.

With questions accumulating on the neighboring Iran and because of the five years lead time to turn a refinery from greenfield into operation, IPIC is driving up to speed the Fujairah refinery project with the support of engineering companies like Shaw, Fluor or Technip which have local capabilities to ensure the project completion on time.