In June 2013, the US energy agency, Energy Information Administration (EIA) updated its estimation of the shale gas reserves in the world and published its first estimations for the shale oil where USA ranks in the Top 5 countries in both cases. According to the 41 countries analyzed by the EIA, the 95 basins reviewed in the world would hold:

In this report, the ranking of the Top 10 countries for the shale gas has been updated as following:

Regarding shale oil, the ranking of Top 10 countries by recoverable reserves appears differently as: 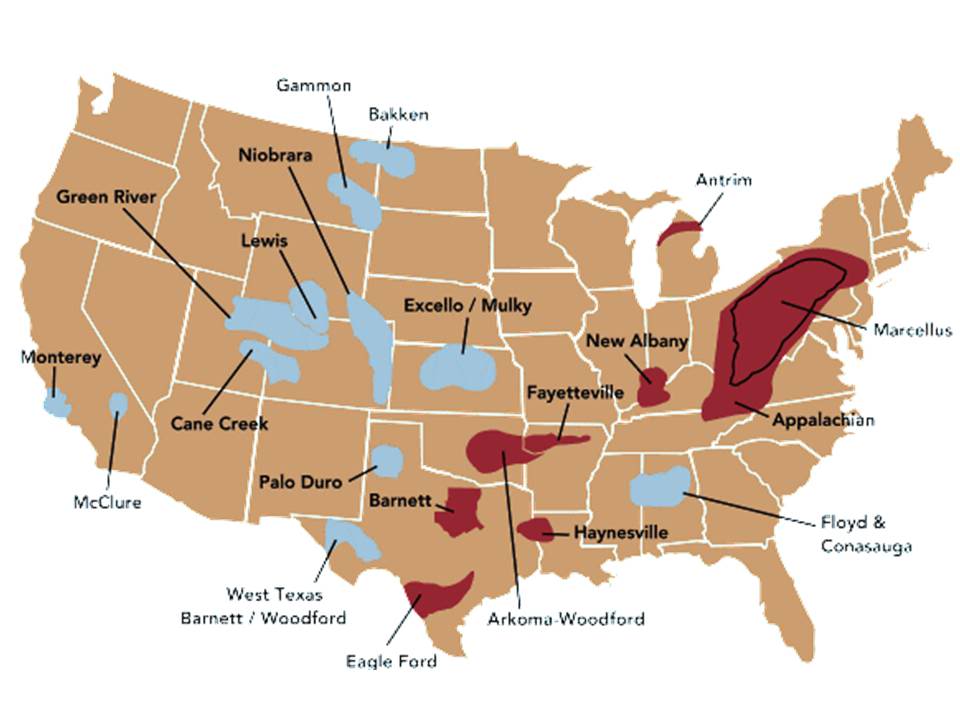 With this position among the Top 5 countries in the world for the reserves of unconventional resources and considering the high development capabilities it has proven over the last years, USA demonstrates that not only it will become self sufficient in oil and gas but that it will also have the potential to influence the global markets in comparison with the OPEC countries.

After intensive internal debates in 2012, the first half 2013 brought in some indications about USA liquefied natural gas (LNG) export policy.

During the IHS CeraWeek, the super major ExxonMobil took official position in favor of the the export of LNG under the name of “Free markets and free trade” regardless its own interests in the domestic petrochemical markets.

Then the US Department of Energy (DOE) has granted the third LNG export license to countries without free trade agreement (FTA) to the BG Group Lake Charles LNG Export Terminal LNG project in Louisiana.

This DOE decision was following the approval for the:

So far USA have proven to be able to ramp up their production of shale gas faster than the demand on the local and export markets so that the prices of thegas gas at the Henry hub remains stable at low level, below $ 5 per mm btu, so that the downstream sector should continue to find in USA one the of the most attractive country to invest in all petrochemical specialities.

In addition the exploration of the Gulf of Mexico is running again at full speed, propelling the USA by far as the first country in the world by projects capital expenditure for the next five years with more than $260 billion projects identified in www.projectsmartexplorer.com, five times more than Saudi Arabia on the same period.

Hess Corporation (Hess) and its partners, BHP Billiton (BHP) from Australia, Chevron from USA, China National Offshore Oil Corporation (CNOOC) from China through its Canadian acquisition Nexens, and Statoil from Norway, have selected the Japanese engineering company Modec to provide the Stampede project with a tension leg platform (TLP) to be moored in the Gulf of Mexico in USA.

The California-based company Sempra Energy (Sempra) and its partners, GDF-Suez from France, Mitsubishi Corporation (Mitsubishi) and Mitsui  & Co, Ltd (Mitsui) from Japan , are reaching the final stage of the complex process approval from the Federal Energy Regulatory Commission (FERC) for its Cameron LNG project at Hackberry in Louisiana, USA.

The super major ExxonMobil from USA and Statoil from Norway, made the final investment decision (FID) in April 2013 to start the development of the Julia oil and gas field in the US part of the Gulf of Mexico.

Drilled in 2007, 285 kilometers southwest of New Orleans, Louisiana, USA, Julia field is among the largest crude oil fields discovered in the Gulf of Mexico in the years 2000s.

Fluor at work on FEED for Sasol US Mega Projects

The South African company Sasol is currently proceeding to the selection of the license and technologies required for the olefins and derivatives production units of its integrated gas-to-liquid (GTL) and ethane cracker complex to be built at Lake Charles in Louisiana, USA.

The Oklahoma-based Williams and the Houston-headquartered Boardwalk Pipelines Partners (Boardwalk) signed a letter of intend (LOI) to form a joint venture on building the Bluegrass Pipeline project in USA to connect the Marcellus and Utica giant shale gas fields in the northeast to the petrochemical industry lying along the Gulf Coast across Texas and Louisiana with natural gas liquids (NGL).