Upstream most of the projects are related to unconventional oil and gas, especially the shale gas for which China is estimated to hold the second largest reserves in the world after the USA. 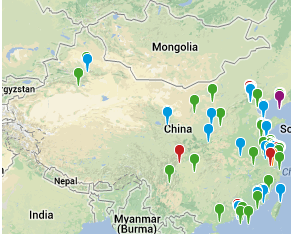 Considering that China is also ranking on the second position after the USA for the coal reserves, all the projects to produce hydrocarbons from coal offer many opportunities for strategic alliances or technology partnership between the Chinese companies and the foreign licensors for coal to liquid or coal to methanol or coal to olefins applications.

Midstream is also an active sector since the Chinese companies are the first operator in Kazakhstan and expand their network of oil and gas pipeline continuously to increase the import capacities from the east border.

But overall the downstream sector is the most important as China should remain dependent on petrochemical import until 2035.

So China needs to increase refining capacities in the same time as to upgrade and revamp the existing units to meet the international standards and reduce emissions in its megapoles.

China willing to lead the manufacturing world in quantity and in variety of goods, it needs to develop the corresponding petrochemical industry to meet this domestic demand.

Even through the actual relative slowdown of the Chinese economy, most of the Chinese Provinces stand far from the self sufficiency in petrochemical products opening still many opportunities from foreign investments for new projects in China.

End of May 2013, Fujian Shenyuan New Materials Co. Ltd (Fujian Shenyuan) selected Air Liquide to build, own and operate a production unit of industrial gases for its Lianjiang caprolactam project in the Fujian Province, China.

CNPC and KMZ to double Kazakhstan to China pipeline

The joint venture between the national oil companies China National Petroleum Corporation (CNPC or PetroChina) and the local KazMunaiGas (KMZ) is working on a second crude oil export pipeline from Kazakhstan to China.

Actually based in Leverkusen, Germany, Lanxess was established in 2005 as a separate company with a new brand from the spin off of Bayer’s plastics and synthetic rubber activities.

Sinopec and Huntsman to build Nanjing PO and MTBE