Over the last months the national oil company Petroleo Brasileiro S.A. (Petrobras) has tried to draw conclusions from the lessons hardly learnt on last years with the consequences to delay projects and see the oil and gas production flattening despite the most massive capital expenditure invested in the world.

Sharp discussions between the Brazilian Government, Petrobras and the Brazilian National Petroleum Agency (ANP) has led to reconsider priorities on the oil and gas production in respect with actual resources on exploration, engineering and construction instead of expected capabilities still to come. 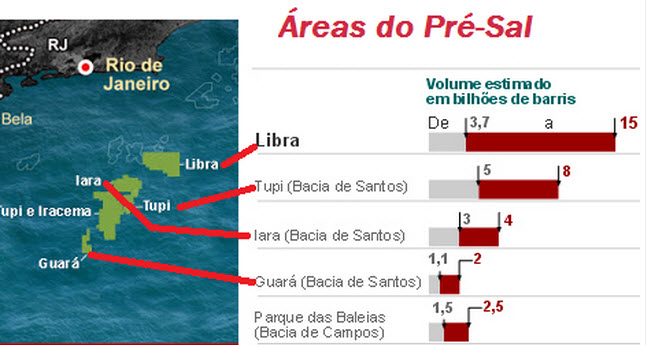 In order to speed up the projects development the Brazilian Government decided to out-source oversea some floating units while it opens exploration and production to foreign companies, putting somehow Petrobras in competition.

In addition ANP put the pressure on Petrobras to stop flaring associated gas.

All these measures should have a positive impact on the production in reviving stalled or queuing projects.

Petrobras relocates P-72 and P-73 in Tupi and Iara

The Brazil national oil company (NOC) Petroleo Brasileiro SA (Petrobras) is preparing the second call for tender for the integration of the floating, production, storage and offloading (FPSO) vessels P-72 and P-73 with a new design resulting from the relocation of these replica FPSOs within the Santos Basin offshore Rio de Janeiro.

The national oil company (NOC) Petroleo Brasileiro SA (Petrobras) and its partners, the majors Royal Dutch Shell (Shell), from The Netherlands, Total from France, and the Chinese champions China National Petroleum Corporation (CNPC or PetroChina) and China National Oil Offshore Corporation (CNOOC) are qualifying the engineering companies and shipyards to be invited to bid (ITB) for the first floating production, storage and offloading (FPSO) to be moored on the super giant offshore pre-salt oil and gas field Libra within the Santos Basin of Brazil.

The development of the Block BS-4 is now moving forward with the call for tenders issued by Quieroz Galvao Exploration and Production (QGEP) for two floating production storage and offloading (FPSO) vessels in view of the Atlanta heavy crude oil project in the Santos Basin offshore Brazil.

The giant discovery Pao de Acucar and its adjacent fields, Seat and Gavea, are reaching the front end engineering and design (FEED) stage to develop the prolific,Block BM-C-33 pre-salt in the ultra deep water of the Campos Basin offshore Macae, in the State of Rio de Janiero, Brazil. This Block BM-C-33 is currently developed by Repsol–Sinopec Brazil (Repsol–Sinopec) together with the national oil companies (NOCs) Statoil from Norway and Petrobras from Brazil.