Occupying one of the richest coast of the Caspian Sea in oil and gas resources, the Republic of Azerbaijan is taking a strategic place between Asia and Europe, between Russia and Middle-East countries.

Under the coordination of the State Oil Company of Azerbaijan (SOCAR) these oil and gas resources were explored and developed smoothly in joint venture with international oil companies (IOCs) because of the lack of export infrastructures across the neighboring countries, especially Georgia and Turkey. 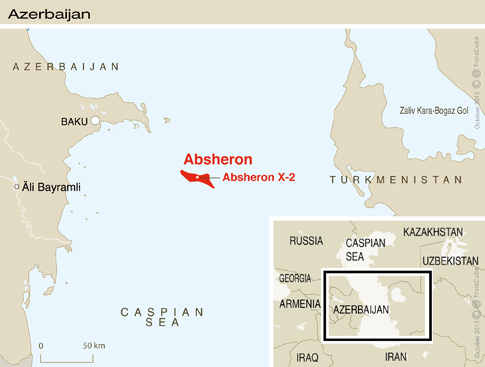 Anyway, since 1992, date of SOCAR registration, companies such as BP, Inpex, Chevron, Hess, Statoil and Total acquired a significant expertise is exploring and producing in the offshore fields of the Caspian Sea.

In doing so they prepared ground to take a leap as soon as Azerbaijan should be directly linked to western Europe.

During years, multiple projects of giant pipelines projects were studied technically, commercially and politically using different routes by the north or the south up to the European gas grid.

But in selecting the Trans-Adriatic Pipeline (TAP) project over the famous Nabuco on July 2013, BP and its partners in the Shah Deniz Phase-2 project, triggered a cascade of investments in multiple projects in Azerbaijan.

The French major Total and its partners, the State Oil Company of Azerbaijan Republic (SOCAR) and the other French oil and gas company GDF-Suez, are finalizing the conceptual design to develop the Absheron offshore gas field in the Azerbaijan Caspian Sea.

As the operator of the Azeri-Chirag-Gunashli (ACG) oil field in the Caspian Sea ofAzerbaijan, Azerbaijan, BP shared with his partners, the State Oil Company of Azerbaijan (Socar), Inpex, Chevron, ExxonMobil, Statoil, TPAO, Itochu and ONGC Videsh, in the Azerbaijan International Operating Company (AIOC) his recommendations to maintain production up to 2024 and beyond.

The London-based BP and its partners, Statoil from Norway, the State Oil Company of Azerbaijan (SOCAR), Total from France, Lukoil from Russia, the National Iran Oil Company (NIOC), and Türkiye Petrolleri Anonim Ortaklığı (TPAO) from Turkey, have made the final investment decision (FID) for the Shah Deniz Stage-2 project  inAzerbaijan.

The national State Oil Company of Azerbaijan Republic (Socar) selected the Danish catalysis expert Haldor Topsoe to provide its first integrated fertilizer project inAzerbaijan with its ammonia technology. With a budget of $650 million capital expenditure, the Republic of Azerbaijan hasmade the final investment decision (FID) to build the country largest ammonia and urea integrated fertilizer plant in the country.